Late December the weather had turned bitterly cold in Aiken, SC so on January 2 I lit out towards Florida to see if I could find warmth and sun.  I didn’t get south fast enough.  My first night out, camping at General Coffee State Park in Georgia, the snow hit and I woke up on January 3rd to huge flakes dropping out of the sky at a good clip.

Roo and I hiked up to the ranger station to ask about road conditions and as I suspected, it was pretty treacherous.   State patrol was asking to people to avoid driving.   So Roo and I settled in for a snow day.

General Coffee State Park turned out to be a great place to get snowed in.  There were a few other campers but Roo and I had all the trails to ourselves and the swamp and forest were absolutely beautiful in the snow. 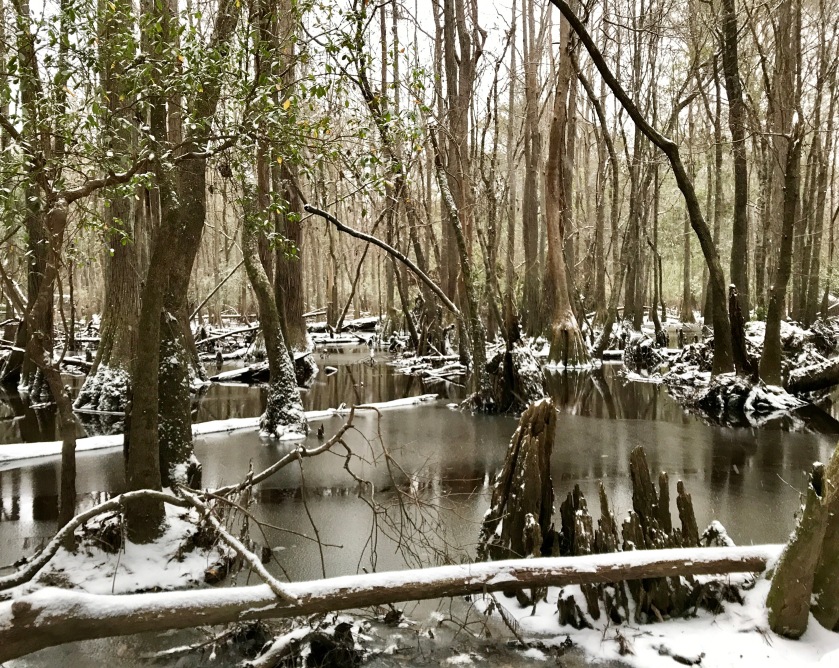 The park had an old farmstead, complete with farm animals and they were all hunkered together in the log barn, trying to stay warm.

Fortunately I had finally figured out and resolved Greta’s furnace issues that plagued my camping efforts during the eastbound leg.  The furnace was humming along and keeping Roo and I toasty and between hikes I had time for plenty of ukelele practice while Roo napped.

The morning of January 4th the temperature started creeping up above freezing and the snow and ice started melting.  By late morning the roads had cleared enough that I felt safe getting out on the roads and continuing south into Florida.

While fueling up at a gas station at some podunk town in Georgia, I noticed an older gent in a pick up truck slowly sliding up, clearly interested in the van, and soon I found myself chatting with Mr. Bo (Beau?) Fender.  In a lovely thick southern drawl he explained that he had owned a VW van back in the 60’s and had nothing but fond memories of his adventures in the van.   He asked me about my travel plans and when I indicated that I was kind of winging it and preferred country to city touring, he jumped out of his pickup and started laying out a route for me along the northwestern coast of Florida.  I figured what the heck and took his suggestions and decided to see where Mr. Fender’s travel tips took me.

I headed south, following a route on country roads through small towns, avoiding any main highways.  I drove past recently harvested cotton fields.  The white billowy remnants of the cotton harvest lined the country roads like snow banks.   Peach, apricot, olive and blueberry farms popped up at regular intervals.  Cattle ranches, tree farms and logging outfits took over as I ventured further into Florida.

I ended up rolling into the small town of Keaton Beach, FL, on the afternoon of January 4th and parked in the driveway of Mr. Fender’s vacation house, at his invitation of course.  The house was locked and I couldn’t get in the house but Mr. Fender had encouraged me to enjoy the view from the decks and Roo and I did.   It was freezing out, in the 30’s, and I was bundled up head to toe, but up on the Mr. Fender’s sunny decks I could lean up against the house in the sun and soak in the warmth from the wood siding and deck and enjoy the view.

After a beer and burger at Walter B’s at the local service station and quick drive thru town, I set up camp in Mr. Fender’s driveway and Roo and I enjoyed a quiet evening.

January 5th, I pushed off early.  The northwestern coast of Florida is one of the least developed parts of the Florida coast, probably because there’s more marsh and tidal flats to be found than beach.  Lack of beaches makes it less popular with the tourists. It was a little desolate, a little wild, a little run down.  It didn’t feel overly developed or commercialized.  Natural and wildlife management areas lined the coast and the variety and abundance of birds was astounding. 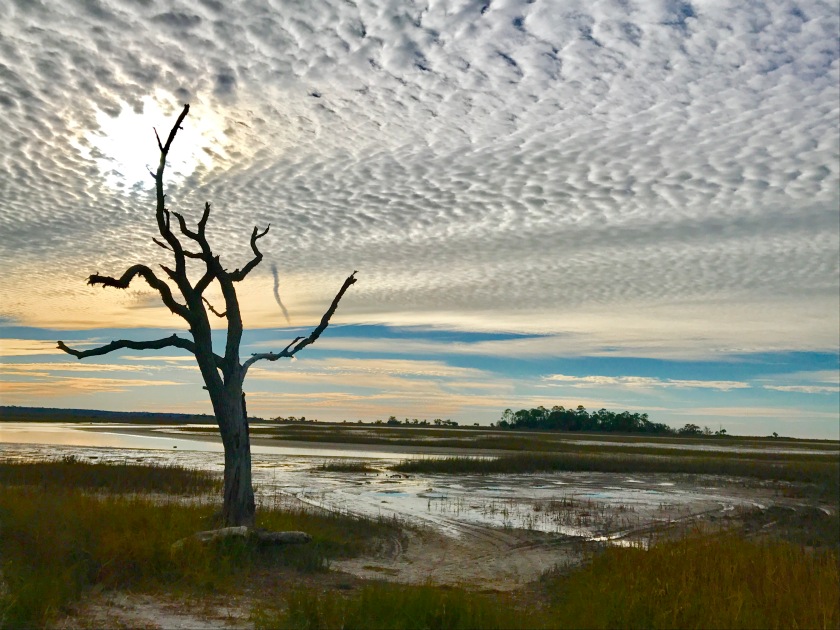 I found a quiet spot to run Roo just outside of Keaton Beach and then a little further on, a good little cafe for breakfast in the historic river town of Steinhatchee, FL.  The waitress at the cafe wanted to know how the heck someone from Seattle, WA had found their way to their little cafe in Steinhatchee.  Word of mouth, baby.

Popped into Manatee State Park along the drive.  I did not know that Florida is speckled with springs.  At this particular park, fresh water bubbles up out of the ground at the astounding rate of 100 millions of gallons daily.   The water is a generally a nice temperate temperature, like 72 degrees, making these spring areas very attractive to wildlife, particularly manatees.  Snorkeling and scuba diving are popular activities at many of the spring sights.  (Which seems a little insane to me considering this is gator territory as well.)

I did see a manatee… sort of.  It was a grey blobby thing floating below the surface and I could see flippers moving.  I also saw my first green heron.

The Suwannee River lets out into the Gulf of Mexico in the area that I was travelling through and Roo and I stopped to do a short hike in the Suwanee Wildlife Refuge.

We encountered an armadillo during a hike.  The little guy didn’t give a hoot about us and just went about his business, rooting around in the forest duff. 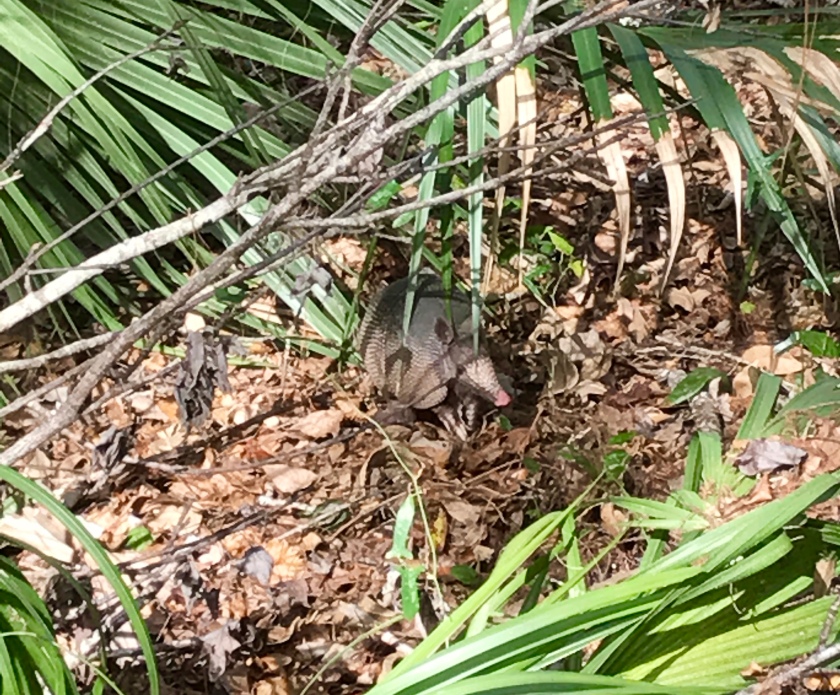 From the Suwannee River, I headed south to Cedar Key, a cluster of small islands off the west coast of Florida.   Here I found a quaint and artsy community, with a good number of historic buildings and houses still in intact, not overly commercialized yet.  I overheard someone say that they could still feel the ‘old’ Florida on the northwestern coast and I picked up on that vibe.

Cedar Key turns out to be a pretty dang good spot for sunsets.

After 2 days in Cedar Key of putzing around and recovering from a bout of food poisoning I decided to loop back up north along the coast and explore more of the gulf coast.  It was a nice, mellow drive along the coast weaving in and out of small towns.    No real big fancy resorts and hotels that I could see.   Apalachicola, FL in particular took me by surprise as being just cute as a button.  That’s a place I’d like to go back to and spend more time exploring.

I ended up at St. Joseph Peninsula State Park the afternoon of January 7th.   The park is just this sliver of land that juts north into the Gulf of Mexico with miles and miles of pristine beach and it’s just mind numbingly beautiful. 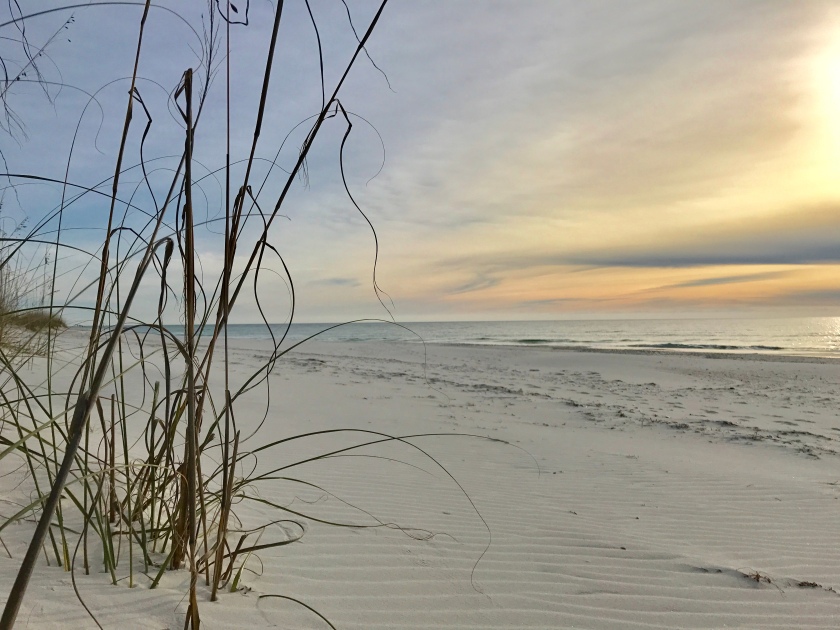 As soon as we got settled into a campsite, I bundled up and headed out with Roo to walk and explore.

Roo wasn’t allowed on the beach but a few of trails in the park were dog friendly and offered incredible views.   The birding was incredible.  Pelicans flew in formation along the beach, skimming along the tops of waves and occasionally peeling off to dive for fish.   Ospreys and eagles perched in the pines, scanning for prey.   Long-legged shorebirds bobbed along the edge of the shore.  A pair of great horned owls perched right in the middle campground and just hung out sleeping for a good portion of the afternoon.

Although the campgrounds were nearly full, the trails and beaches at the park were practically deserted.  I think the cold weather had people hunkering down somewhere inside which worked well for me and Roo.  It felt at times like we had the place to ourselves.

I don’t think I’ve ever been on beaches so clean and unspoiled.  Shell collecting is popular here because of how many unbroken shells you can find washed up on the beach.

Man, was I wrong.  St. George Island State Park was amazing.   This beautiful park has an extensive dog friendly trail system and allows dogs on the bay side beaches.   Roo and I hiked and hiked and hiked for 2 days and had epic games of kick and chase the pine cones.  During those 2 days on the trails, we encountered people on the trail only twice.

On January 10, I packed up camp and started making my way north via back country highways, towards Aiken, SC.

On my last day of driving, I experienced the first serious rain storm of my entire road trip so far and found that Greta’s windshield wipers were coming loose.  Not a good thing when driving 55 mph in the pouring rain on a back country highway with no breakdown lane and and a soft, sandy shoulder.

I returned back to Aiken, SC on January 11th.   The weather was still chilly.  I had never found the warmth but I got sun, beach, snow, and amazing nature.  Other than the windshield incident, Greta performed like a champ.  Roo and I settled in to a studio apartment at my aunt and uncle’s horse barn and got ready to take on a dog and horse sitting gig.   Roo was super psyched to be back at the farm.  She was completely tuckered out from our jaunt to Florida and back as you can see. 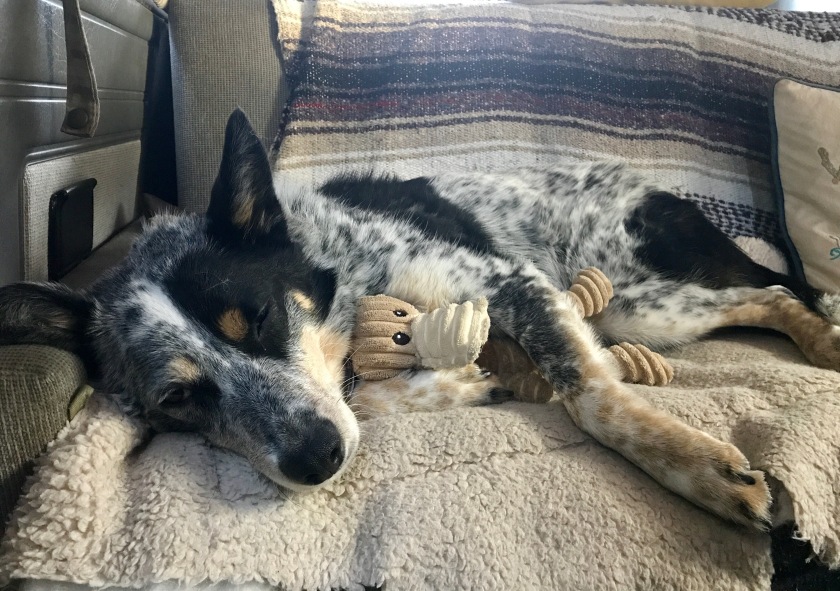 More to come soon about our fun times on the farm.  Stay tuned.