The ferry from Newfoundland to Sydney, NS pulled in to dock at around 9am on July 3rd.  I hit the road to start my drive of the Cabot Trail on Cape Breton Island.

It’s a well known scenic drive that loops around the northwestern part of Cape Breton Island.  It was scenic for sure with steep, forested hillsides plunging down to the ocean and sandy beaches tucked into protected coves.

Someone had recommended checking out a place called Meat Cove.  It’s the town that is farthest north in Nova Scotia.   To get there, one has to divert off the main highway and drive a gravel road for several miles.  My tour book said that Meat Cove only gets 8,000 visitors per year.  Sounded like it was off the beaten path, right up my alley.

Well, it’s off the beaten path but a good number of people are making the effort to get there, certainly more than 8,000 visitors per year.  I arrived at the campground to find it looking pretty full.  It’s a privately run campground, set up on a hill above the beach, with a spectacular view of the coast.   The set up is a little hinky.  Level spots to camp or park are hard to find in some areas and no spots really have any privacy.

I picked a spot that had a gorgeous view of the coast and the beach.   My neighboring campers came over trying to help me find the best level spot to park Greta.  As it turns out the best spot placed us basically bumper to bumper but they insisted it was a-ok.

My kindly neighbors, Janosh and Christina,  were a couple from Lichtenstein who had had a small van outfitted for camping and shipped over from Europe.  They had just recently started their North America adventures.

Roo had a hard time warming up to Janosh.  Guys with beards seems to be a challenge.   She growled at him most of the time.  It REALLY annoyed me that she was being such a jerk to the guy who had let us basically share their campsite.

Janosh and Christina were a very interesting, young couple and it was great to hear about their travels so far and plans for the upcoming months.  They’ve got some great pictures and recaps of the travels on their blog.  (It’s in German but Google Translate will help you out.)

In the campground was one of the most bad ass travel setups I had ever seen.  The rig was owned by a well travelled American retired couple from the DC area.  Their setup was super swank.  This vehicle is meant to get into wild and woolly places yet had all of the conveniences of home.  I had rig envy.   They travel with their cat and the cat is allowed to roam free and will follow along with them on hikes.    A cat that hikes… now that is a cool cat.

Over dinner, I swapped travel stories and commiserated over U.S. politics (despite our efforts to stay off the topic) with the badass rig couple.  The campground has a restaurant with a deck with killer views of the coast where you can sit and sip a beer, soaking in the scenery, while enjoying fish and chips or lobster or a burger.

After dinner, Roo and I wandered down to the beach.   There was a very friendly vibe in the campground and lots of people wanted to meet Roo.   I chatted for a while with two cousins out camping for the weekend.  No one else in their family is in to camping and they’ve bonded over their love for camping and have become camping buddies.  They invited me to share their campfire that evening and with Janosh and Christina in tow, I headed over to their campsite as dusk turned to dark.    We sat around the fire, swapping stories, laughing, enjoying the scenery and the conversation and then out of the blue we were treated to a fireworks show from the beach below.    Ooooohs and awwwwws  and applause went up from the campground at the end of each little round of fireworks.  It was great, great fun although Roo didn’t think it was so terrific.  She’s never had issues with fireworks before but this was the first time she had a front row seat for the show and she didn’t care for it at all.

That evening we talked about how the campground was perfectly situated for the sunrise.  I set an alarm before heading to bed and I woke to see Janosh and Christina already up and taking in the incredible view.

I pushed off from Meat Cove on July 4th and continued the scenic Cabot Trail Drive.  I didn’t have long to drive that day before coming to my next intended destination, Corney Brook Campground.  A few travelers had recommended this spot to me along the way and I was not disappointed.  It’s a sweet little first-come, first-served campground right on the ocean.

It was hot out and I decided to brave it and go for a dip.   At the end of the beach was a  perfect little swimming hole in the brook, just before it let out into the ocean.  The brook wasn’t as cold as I feared it might be.  It was fabulous to gently tread water and ride the current towards the ocean and then take a couple of strokes upstream to repeat the loop.

It was another very friendly and congenial campground scene.   A nice couple offered to grab groceries for me while they ran into town and then we hung out and chatted while sipping on beers after their grocery run.  Another couple in a Westy shared their snow crab and beers with me that evening as we talked about our love for Westy’s and swapped VW travel tales.

As the sun went down, we all settled in to watch the sky turn shades of pinks and purples.  Corney Brook Campground is known for being a good spot to see the sunset and it did not disappoint. 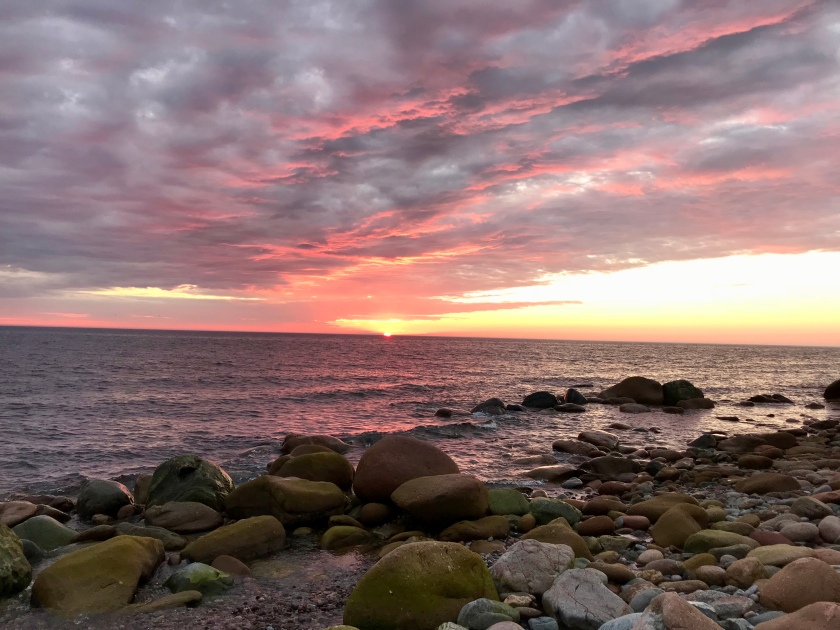 In the morning, Roo and I hiked the Corney Brook trail up to a little waterfall before hitting the road.

From Corney Brook I continued the drive down the coast and landed at the campground at the end of town in Inverness.   Roo and I enjoyed some play time down at the beach and I was amazed at how few people we saw.

The evening I visited the Glenora Distillery and Inn outside of town to do some whisky tasting and grab some dinner.  Delicious all the way round. 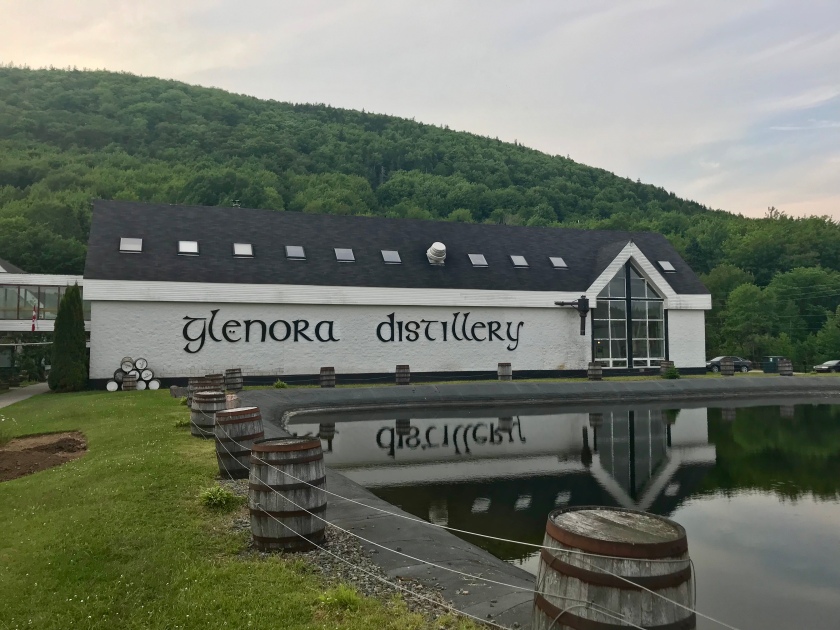 After the whisky tasting, I headed back into town to the Fire Hall to catch a ceilidhs,  pronounced ‘kay-lee’, a social event with traditional music, dancing and story telling.    I expected that the performers would be older folks but to my surprise and delight, the performers were young people of the community, ranging in age from 11 to 32.   Many of the performers were siblings.  There was a brother and sister, he a fiddler, she a pianist.  Two brothers were dancers.  Three sisters played a variety of instruments and sang and danced.  I could only imagine how musical their households must be.   At the end of the performances, I lingered for a bit and watched how everyone socialized with each other. It struck me how the kids didn’t end up on one side of the room and the adults on the other.   Folks of all ages were engaged in conversation, laughing and kidding around and enjoying each other’s company.  It was a really charming experience and a great note to end on for my travels in Nova Scotia.

On July 6th, I pushed off from the campground in Inverness and started the final phase of my road trip, the return drive to the Pacific Northwest.  I was hoping to be back in Seattle by July 28th to join some friends for our 10th annual garden tour.   I was giving myself only 3 weeks to cover a route approximately 4000 miles in length.  Yikes – not the typical way I like to roll.  I was definitely going to have to break my ‘no more than 4 hours driving time per day’ rule.

It was mostly highway driving for me that day and in the afternoon some nasty storms rolled in bringing pouring rains.  Sheets of water poured off the highway and most of us smart drivers took our speeds way, way down.   A couple of not so smart drivers ended up hydroplaning off the highway when they failed to check their speed.  They looked a bit shaken and sheepish as the rest of us drove by in the downpour.

Almost all other fellow travelers had pooh-poohed New Brunswick and indicated there’s not much to see or do.  And granted, most of what I saw in New Brunswick was from the van but what I did see I really liked and if I get a chance, I will definitely go back to poke around more.    I drove through beautiful, rolling farmland and forested hills at times.  When I diverted off the highway for lunch or a potty break, I inevitable ended up in a cute town with a charming little historic downtown with art galleries and restaurants.

I had booked a room at a BnB that evening in a town called Sackville, which I thought was an awful name for a town and sounded pretty dreary.  I didn’t really care.  It was cheap and it was the right distance along my route.  I arrived at my lodging, a room in a large, rustic farmhouse just outside of town and was immediately smitten with the beauty of the rolling farmland of the area.  Roo couldn’t have been happier running around in the fields around the house.   My hosts were a very interesting, down to earth older couple and asked if I was going into town.  My GPS had taken me into town on a backroad and I thought, what town?  They started rattling off all of the things to do and I thought, heck, I better go check this place out.  It sounds great.  So Roo and I got back in the van and drove into town via Main Street to find a cute little college town.   The small downtown area has some nice historic buildings and fun pubs and restaurants.  From downtown, you can connect to a trail system that goes through the town’s waterfowl park and Roo and I enjoyed a nice walk after dinner and beers.  Sackville turned out to be pretty great.

July 7th, I headed back into the town of Sackville to check out their coffee scene and farmers market and again, was not disappointed.   I then hit the road,  headed to Rivier-du-Loup on the Saint Lawrence River in Quebec.   I really wasn’t ready to be leaving the Canadian Maritimes behind.   I’m a little embarrassed to admit that I got a little teary when I crossed the New Brunswick/Quebec border.  I felt a strong desire to turn around and head back to the beaches of Nova Scotia and start figuring out how to convince the Canadian government to let me stay permanently.    But I pushed those feelings down and drove on and decided to back burner plans to emigrate to Nova Scotia… for the time being.  🙂