On Friday, April 6th I pushed off, heading towards northern Georgia. I intended to kick off this next big road trip push by visiting the trailhead of the Appalachian Trail.

The first night out we camped at Hickory Knob State Park on the border of South Carolina and Georgia. Roo and I did a little hiking and admired the dogwoods and wildflowers in bloom sprinkled through the forest. 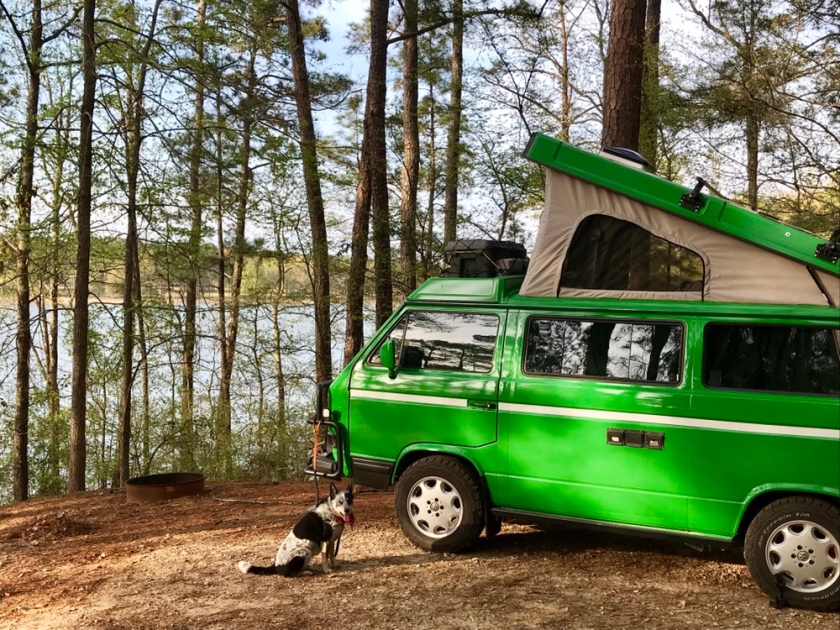 The next day I drove into Athens and was immediately charmed. Historic downtown, good eating and drinking options, artsy vibe. Lots of big old houses with pretty yards.

Athens is home to the University of Georgia (Go Bulldogs!) and I got the impression that downtown and the surrounding neighborhoods have a big college party scene.

I hit the farmers market which had a really nice selection of vegetables and meats and crafts from local growers.  Lots of shiny, happy people milling around. Live music played and the market had a festive atmosphere.

After the farmer’s market, I checked out the Georgia Art Museum which had a nice collection of art and crafts, both contemporary and classic.

Funny take on a wedding ring.

Titled “Patterning Could Cause You to Disappear in a Crowd” 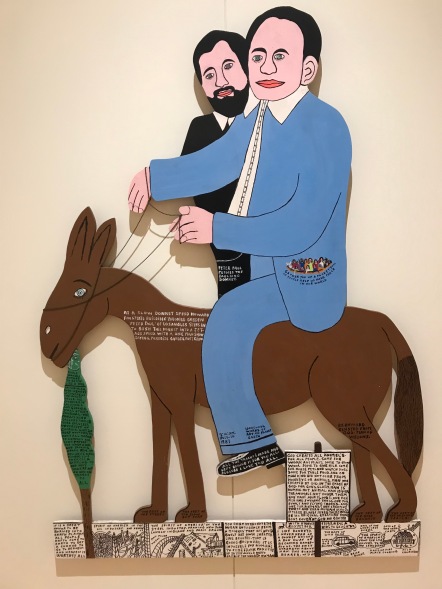 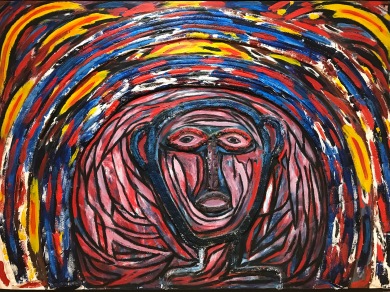 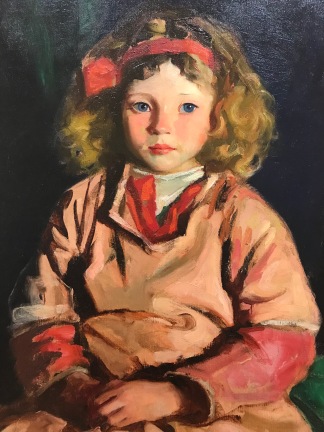 Then on to the Georgia State Botanical Gardens where I was finally able to identify some of the plants that I’d been seeing on recent hikes.  The fragrant azaleas knocked my socks off! 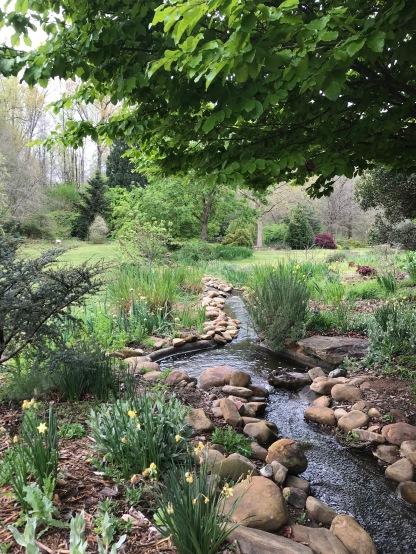 After checking into my hotel, Roo and I set off to explore downtown Athens.  There were two music festivals going on downtown and lots of folks out enjoying the entertainment.

That evening I opted to explore the Normaltown neighborhood, a little removed from downtown and the UGA campus, hoping it would be a little less collegiate.   Cocktails at The Old Pal and food and music at the Hi-Lo Lounge proved fun.

On April 8th I headed out north from Athens, to Helen, GA, a town posing as a Bavarian village, hoping I’d find decent German fare.

I lucked out. After stuffing myself with Wiener Schnitzel, spatzle and red cabbage, I grabbed a campsite at Unicoi State Park just outside of Helen and did a little late afternoon hiking with Roo.

As I pulled into our campsite, a little commotion outside caught my attention and I found that a pileated woodpecker had landed on Greta and was checking out his reflection in the tinted windows.

North Georgia is quite hilly and water is plentiful. There are lakes and ponds and rivers and creeks and waterfalls every which way you turn.

On April 9th, Roo and I pushed off from Unicoi State Park.   We stopped to hike to Duke’s Creek Falls.

I landed at Amicalola State Park that afternoon to camp.  As I drove into the park, a mama black bear and two mature cubs were hanging out in a clearing just off the side of the road.

Amicalola is where people start their hike of the Appalachian Trail if hiking south to north.  My hope was to go the trailhead Appalachian Trail and do a little hike but getting to the true trailhead was more difficult than I imagined. It required a 4 wheel drive vehicle or 16 mile round trip hike. So I settled on hiking along the approach trail and taking a picture of the sign.

Over 2000 people have started their hike from Amicalola State Park so far this year and I watched several people set off to hike the Appalachian Trail as their family and friends saw them off.  And then I watched as the hikers slogged up the trail with their packs on to tackle the 600+ stairs to the top of Amicalola Falls.  Brutal start!

Wildflowers lined the trails and being a complete plant nerd, I was sort of freaking out.    I’m sure more than a few people wondered about the woman getting down on her hands and knees to get up and close with plants. 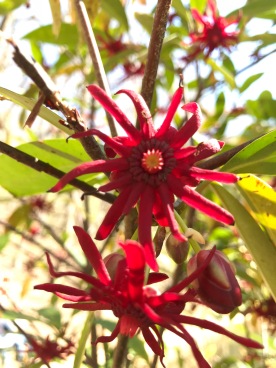 I took off from Amicalola State Park on Tuesday, April 10.  I cruised through the scenic, rolling hills of northern Georgia and wandered the backroads.  The town of Dahlonega, GA was a pleasant surprise.  Very cute small historic town set up in the rolling hills of north Georgia. The first US gold rush happened here in the 1820’s so you can imagine some of the fantastic old homes and buildings to be seen.

That afternoon I landed at the farm of Mr. Hubert Bailey, in Dawsonville, GA. I had met Mr. Bailey in March at a sheep herding trial in South Carolina and was really happy that it was working out that I could reconnect with him on my travels through Georgia.

Mr. and Mrs. Bailey were kind enough to let me camp on their farm for the evening.  Roo worked sheep that afternoon and then I watched Mr. Hubert work a couple of his younger dogs.   It’s a remarkable thing to watch.

The morning of April 11th, a group of local community leaders rolled came to the Bailey Farm on a tour of local agri-businesses and I watched as Mr. Hubert and one of his students did demos for the group.   His student did a demo with her dog and Indian Runner ducks.   Pretty amusing!

After the demo Mr. Hubert and his student and I headed into town to the Wagon Wheel Restaurant for a good ol’ southern style buffet.  Everyone seemed to know everyone and the local sheriff went around the restaurant saying hi and shaking hands.

After lunch, we headed back to the farm and Mr. Hubert and we took a quick jaunt up back into some of the pastures.  The views to the distant mountains were incredible.

That afternoon I reluctantly pushed off from the Bailey’s and headed northeast to Tallulah Gorge State Park.   Roo and I hiked along the gorge rim trail that afternoon and then settled in for a night of camping.

On April 12th, Roo and I left Tallulah Gorge State Park and drove north to the town of Clayton, GA, based on a tip.   I loved Clayton, GA.   Lovely, historic downtown in a beautiful mountain setting.  People were super friendly and good food was easy to find.   I lunched at Fortify Kitchen and Bar.  Delicious!!

Just outside of Clayton, GA is Black Mountain State Park.  It’s Georgia’s highest state park at an elevation of 3,640 ft.

I got one of the best campsites so far on the trip with views of the distant mountains.  Roo and I hiked that afternoon and then watched the sun set.

April 13th, I packed up camp and did some more hiking with Roo.

After another stop in Clayton for a quick bite and beer at the Universal Joint in Clayton,  it was time to leave northeastern Georgia and start making my way towards Asheville, NC.   I was a little sad to have to be pushing on.  I’d gotten so many tips on other cute towns and beautiful places to see but I just wasn’t going to have time to check everything out.    Another time!  I’d love to come back to see the fall color.

I’m SO grateful for the time I had in northern Georgia.  The area of the country hadn’t really been on my radar and if it wasn’t for meeting Mr. Bailey at that sheep herding trial in South Carolina in March, I probably wouldn’t have ventured into this neck of the woods.   It’s just beautiful, more rugged and wild than I’d expected.  Cruising the backcountry through the farmlands, along the rivers, past waterfalls and through the mountains had been excellent road tripping time.

I’d really gotten a taste of what southern hospitality is all about and it’s a wonderful thing, something I wish could be bottled and passed out to other parts of the country.  The kindness, generosity and welcoming spirit of the people I encountered on this leg of this trip is something I won’t ever forget.